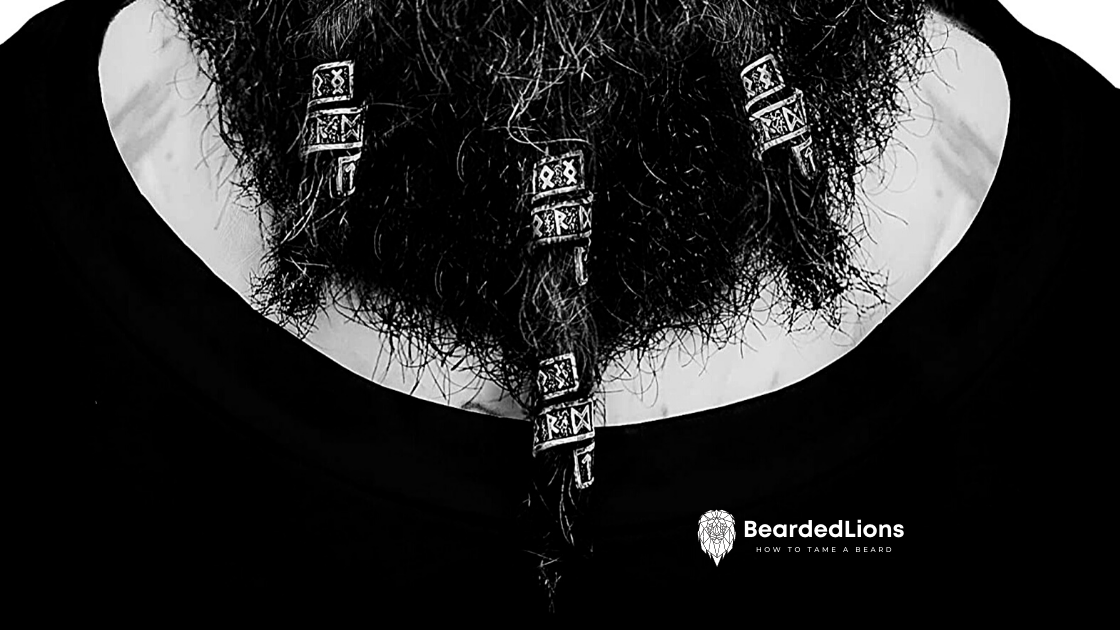 With the rise of beards and the return of manliness, beard rings are a must have. If you belong to the select group of bearded men, now is a good time to try a beard ring.
This is actually a good way to keep your beard healthy and moisturized, is to grow it out and tame it with a beard ring. That’s why today we’ll be telling you all about different types of beard rings.

So if you’ve finally decided to take the plunge and grow a beard, first good for you, that’s a big decision! And second, you’ll find that one of the most important things to consider when you’re growing a beard is what kind of beard ring you’re going to use. Because this will take your beard to the next level. So next, time you shower and look at the mirror you won’t have to see weird loop of hair dangling from your chin anymore.

What is a beard ring?

You ask, we answered. A beard ring is a small ring of metal, often gold or silver, typically worn around the neck and underneath the beard. It is the equivalent of the ring you wear on your finger only much smaller. Typically, the openings of these rings are just a quarter of an inch in diameter.

The purpose of the beard ring was to pull the beard downward and keep it from growing over the wearer’s mouth. The beard ring is not commonly worn today, but can be found in jewelry stores and at other cool and colorful joints like say, a Renaissance fair. You certainly found them online as well.

Difference between beard rings and beads?

The beard rings are pretty similar to beard beads, they are both accessories for your the beard of your dreams; however, the beads are usually smaller in size and may include different colors or stones. These can be woven into your chin hair, dreadlocks, beard braids, and other facial hair easily. While rings are worn around a dreadlock beard or braided beard.

Historians identify a couple of cultures throughout history that wore beards in their facial hair. The Norse Vikings were one clan to style their hair with silver and steel beads typically carved with runes, while early Celtic cultures also sported bearded rings with intricate patterns.
This look has also been heightened by films displaying Norse cultures, including Marvel’s Thor. Since then, the beard jewelry trend has also grown popular for the various ways to style beard adornments and beads.

With so many different types of jewelry for your beard, beard rings are among the most popular. But with so many beard rings out there, it’s hard to know which ones to buy. Check out some of our favorites. There are different beard rings: A loop, a bar, a loop with a bar, and a double loop. These rings may be made from multiple types of metal, but you’ll mostly see bronze or steel.

This is a Thor’s Hammer ring for your beard made in bronze. Mjölnir (English: Crusher), is Thor’s hammer – a powerful symbol of the Norse God of Thunder.

Thor is a righteous god of great might and girth, whom mortals regard as the protector of mankind.

His hammer, Mjölnir, was capable of levelling mountains and was so heavy that no one else was able to lift it from the ground. Shop at GrimFrost.

This is a large beard ring in bronze with an Yggdrasil design. Yggdrasil, the World Tree, is an immense ash tree with branches that extend far into the heavens.

It is central and very holy in Viking mythology, and the gods hold their courts there on daily basis. Warden trees linked to Yggdrasil were kept as late as the 19th century in venerated areas of Scandinavia.

Offerings were made to the trees, that were considered to be guardians and bringers of luck. Shop at GrimFrost.

This is a large beard ring in solid sterling silver with a Valknut design and the Elder Futhark runic alphabet.

The Valknut (warrior’s knot) is an ancient symbol that appears on runestones as early on as the 8th century.

It is associated with the god Odin and symbolizes his power to lay bonds upon the mind, turning men helpless in battle, or making them fearless and filled with battle-madness, intoxication and inspiration. Shop at GrimFrost.

This beard ring is made from stainless steel and is

The Runes design denotes the characters of any of several alphabets used by the Germanic peoples. This beard ring is made from stainless steel and is

This beard ring is literally the head of a wolf and it comes with a history.

Fenrir (Wolf): When the warrior arrives at the medicine woman’s hut, he spreads the goods out on the table. She says “I will cure your ills, but the price is this item.” The warrior takes it off and hands it to the woman. Pleased, she caresses the pendant: “Fenrir. It is said to be shackled in these woods. Even the gods are afraid of it, and with good cause. Let us ask someone such as the one-handed Tyr! This jewelry is powerful, since the power of Fenrir is bound to it.”

These are similar rings/beads as the Norseman Trader ones, but they are slightly smaller, and come with a narrower hole.

The design is practically identical, focusing on the 24 different Elder Futhark Rune alphabets.

The material is a metal alloy, considered to be quite durable. Find it on Amazon.

How to use beard rings?

You can use several beard rings to put them at different length positions, making them look dreadlocks. If you want to make them look like dreadlocks, you can use bright-colored plastic beard rings.

For braided beard rings, you may want to do a single large beard with one steel ring or multiple braids with small cylindrical rings.

The mission of BeardedLions.com is to promote beards, the growth of beards, and the acceptance of beards.